The Amazon rainforest covers around 5.5 million square kilometres of land and sprawls over approximately 9 countries, it is considered one of the most biodiverse regions on earth. There is an increasing concern in respect of the rainforest and its potential destruction due to 60 new hydroelectric dam projects that are currently in progress and in respect of those that have already been constructed.

Hydroelectricity is electricity produced from hydropower and is proven to produce lower levels of greenhouse gases than fossil fuel powered energy plants; they also produce no direct waste and consume no water. However despite having numerous advantages in terms of renewable energy and being one of the most affordable electricity sources in the world, these dams are producing devastating consequences for the wildlife inhabiting these regions and to the indigenous tribes that inhabit the banks of the Xingu River in Brazil. All of these issues are currently being legally challenged by environment and indigenous groups.

The construction of hydroelectric dams is detrimental to the wellbeing of some of the most protected and rare species that can be found in the Amazon. The rainforest is home to approximately 40,000 plant species, 427 mammals,1300 bird species, 378 reptiles, 400 amphibians, 3000 freshwater fish,1600 tree species and 100,000 insects and invertebrates, all of which are threatened by the vast amount of construction that is taking place.

Prior to the hydroelectric dam phenomenon, the Maranon river was subject to contamination due to oil spillages, this resulted in large amounts of fish floating in the lagoons and littering the landscape, causing indigenous tribes to lose a vital source of subsistence and income. Now, the Amazon’s marine life face further destruction as the dynamics of the river is changed and fish migration paths are blocked by dams. The disturbances created by these man made obstacles have caused researchers to elevate the conservation status of many breeds of aquatic life homed in the rainforest, an example of which is the Giant Amazon Catfish which has been deemed largely at risk of extinction due to the disturbances in migration routes.

Other species substantially impacted by the creation of dams beyond the vast regions of the Amazon rainforest include: 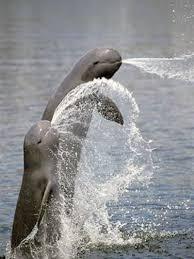 These River dolphins depend on migratory routes to survive. Irrawaddy Dolphins have seen a significant decrease in their food supply due to recent and ongoing construction. They’re also victims of construction noise which significantly harms their hearing. The increase in boats due to ongoing development also leads to more Dolphins suffering accidental deaths.

The Tapanuli Orangutan was discovered in 2017. With only 800 of the species remaining, the endangered species is the sole victim of hydroelectric construction plans initiated in its habitat in Sumatra, Indonesia. It has been considered ‘Lunacy’ to allow construction plans to go ahead. The Tapanuli Orangutans will not survive the construction of the $1.6 billion pound hydroelectric dam project. The Tapanuli Orangutan is registered on the IUCN red list of Threatened Species, and all species of Orangutans have been protected by legislative acts since 1931 throughout Indonesia. The act prevents Orangutans from being captured and kept as a pet or killed, therefore, arguably, the Indonesian government has violated its own laws, by approving the development of the dam.

Furthermore, we must not forget the Munduruku tribe. These ethnic groups have descended from, and identify with the original inhabitants of their region and are often threatened in regards to sovereignty, economic wellbeing and access to resources. The hydroelectric dam constructions are not only harmful and destructive towards the natural elements of the rainforest, but are inhumanely depriving indigenous people of their homes and villages, their possessions and their essential resources.

These arguments prompt many legal issues concerned with human rights and environmental protection. When indigenous people are faced with problems such as potentially losing their land, a special set of political rights in accordance with international law is applied, these rights are laid out by the United Nations. The United Nations previously issued a declaration on the rights of indigenous people to guide member states, this helps preserve culture, identity, language and natural resources for tribes. This declaration was established in 1982 and works to develop the protection of indigenous peoples’ fundamental freedoms. The Indigenous and Tribal Peoples Convention 1989 is also designed to allow tribes to remain distinct and free of discrimination. This act sets out 44 articles which are divided into 10 parts, these rights include access to and preservation of their land.

The law regulating issues facing the environment are seen to be most adequate and are frequently enforced by activist groups. The Environment Protection Act 1990 is particularly relevant to these ongoing issues, and might take effect in respect of ongoing developments. In the US jurisdiction, there is also an Endangered Species Act 1973, this protects all animals registered as endangered. Due to the location of these construction works, this Act could also be utilised to protect some of the most vulnerable species living in these parts and to counter the devastation that will be the consequence of these invested works. However, as demonstrated by the Tapanuli Orangutans, most of the enforceable legislative protection these sentient beings should have shielding them is simply overlooked.

We are grateful to everyone who contributes to the Advocates for Animals blog. Blogs should not be taken as legal advice nor do they necessarily reflect the views of the firm